The Energy Outlook explores the forces shaping the global energy transition out to 2040 and the key uncertainties surrounding that transition. It shows how rising prosperity drives an increase in global energy demand and how that demand will be met over the coming decades through a diverse range of supplies including oil, gas, coal and renewables

The speed of the energy transition is uncertain and the new Outlook considers a range of scenarios. Its evolving transition (ET) scenario, which assumes that government policies, technologies and societal preferences evolve in a manner and speed similar to the recent past, expects:

The Outlook considers the energy transition through three different lenses – by sector, region and fuel – each of which illuminates different aspects of the transition. It also looks at the impact of faster progress in reducing carbon emissions

Industry currently consumes around half of all global energy and feedstock fuels, with residential and commercial buildings (29%) and transport (20%) accounting for the remainder. In the ET scenario, while the industrial sector accounts for around half of the increase in energy consumption over the next 25 years, energy use in the buildings sector also grows robustly, driven by an increase in demand for space cooling, lighting and electrical appliances. Global demand for both passenger and freight transport services more than doubles by 2040. But the impact on transport fuel demand is largely offset by efficiency gains. In the EU, new cars in 2040 are likely to be around 70% more efficient than in 2000.

The majority of the increased energy is consumed in Asia: in the ET scenario, China, India and other Asian countries account for around two-thirds of the growth. Energy demand within developed economies such as Europe, North America and Japan is flat. China and India each account for around a quarter of the increase in world energy over the Outlook. By the 2030s, India emerges as the world’s largest growth market for energy and Africa plays an increasingly important role in driving energy demand.

In the ET scenario, renewable energy is the fastest growing source of energy (7% p.a.), accounting for over 40% of the increase in energy supplies. By 2040 oil, gas, coal, and non-fossil fuels are projected to each provide around a quarter of the world’s energy. Natural gas (1.6% p.a.) grows much faster than either oil or coal, with its share in primary energy overtaking coal and converging on oil. Oil grows (0.5% p.a.), although is projected to plateau in the 2030s. Coal consumption is broadly flat, with its share in primary energy declining to 21%, the lowest since the industrial revolution.

The continuing growth of carbon emissions in the ET scenario highlights the need for an even more decisive break from the past if climate goals are to be met. The ‘even faster transition’ (EFT) scenario illustrates one route to achieving such a break, based on a sharp increase in carbon prices and other polices to encourage energy efficiency and fuel switching. Energy demand continues to grow in the EFT scenario, but at a slower rate and the share of renewables in primary energy increases to around a third by 2040. Even so, oil and gas together account for more than 40% of world energy in 2040

Global GDP (gross domestic product) growth is projected to average around 3 ¼% p.a. (at Purchasing Power Parity exchange rates), broadly in line with growth seen over the past 25 years. The rise in global output is supported partly by population growth, with the world population increasing by around 1.7 billion to reach nearly 9.2 billion people in 2040. But the main driver of economic growth is increases in productivity (that is, GDP per person), which accounts for three-quarters of global expansion and lifts more than 2.5 billion people from low incomes. 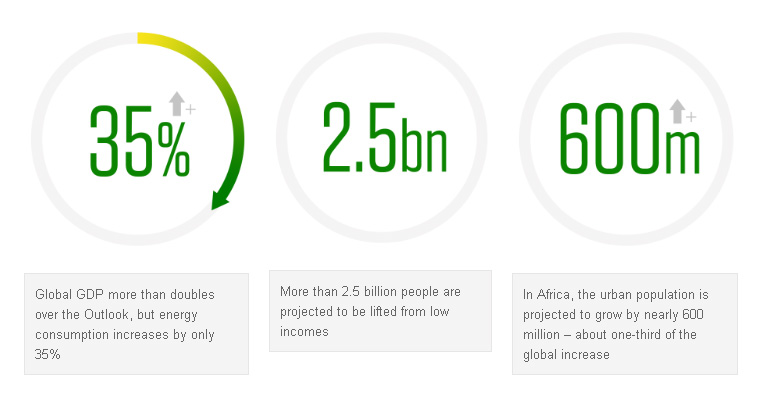 For example, in the ET scenario, there are nearly 190 million electric cars by 2035, higher than the base case in last year’s Outlook of 100 million. The stock of electric cars is projected to increase by a further 130 million in the subsequent five years, reaching around 320 million by 2040.

Another trend that comes into sharper focus by moving out to 2040 is the shift from China to India as the primary driver of global energy demand. The progressively smaller increments in China’s energy demand – as its economic growth slows and energy intensity declines – contrasts with the continuing growth in India, such that between 2035 and 2040, India’s demand growth is more than 2.5 times that of China, representing more than a third of the global increase.

Africa’s contribution to global energy consumption also becomes more material towards the end of the Outlook, with Africa accounting for around 20% of the global increase during 2035-2040; greater than that of China.