A new route is about to open up to take US gas to the world. Dominion Energy’s Cove Point, about 50 miles south-east of Washington, is scheduled to start producing liquefied natural gas by the end of the year. It is part of a first wave of LNG plants built to take advantage of low-cost gas from the US shale revolution. LNG — gas super-cooled to -160°C so it can be carried in tankers — is bringing the surge in US gas production over the past 15 years to the rest of the world. This moment of triumph for the US LNG industry, however, is shadowed by uncertainty. A second wave of about 20 more proposed plants, backed by companies including ExxonMobil and Royal Dutch Shell, is waiting to go. They have the support of the US administration, which is trying to boost gas exports to contribute to President Donald Trump’s goal of reducing the trade deficit. But those projects first need to find buyers for their gas. The first wave of projects — the first LNG export facilities to be built in the US outside Alaska — is coming on stream over 2016-19, beginning with Cheniere Energy’s Sabine Pass plant, which started shipments last year. By the time they are all in service, they will be able to export about 9bn cubic feet of gas a day, or about 12 per cent of US production. 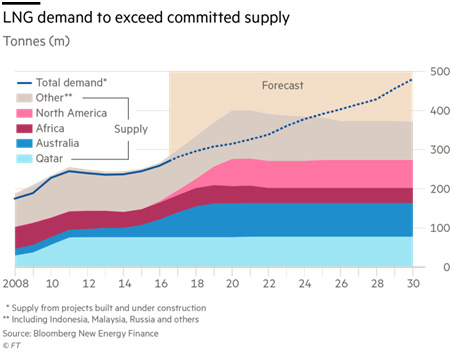 But their output is coming on to a market that is awash with LNG. Thanks to the additional supply from the US and new projects in Australia, buyers have the upper hand and have been using that position to try to drive down prices. Gail, the Indian gas utility, signed on as a buyer for some of Cove Point’s LNG in 2013. This week, BC Tripathi, its chairman, told a conference in New Delhi that he was seeking to renegotiate two of its contracts. Gail is part of Petronet LNG, the Indian government-backed gas importing joint venture, which has already succeeded with a renegotiation, last month reaching an agreement with Exxon to cut the price of LNG from the giant Gorgon project in north-west Australia. “Gas is a tough market,” said Robin West of the Boston Consulting Group. “The whole business is in a race to the bottom to get costs down.” 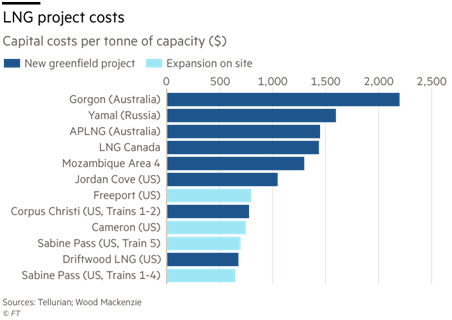 At the North American Gas Forum in Washington this week, would-be LNG exporters were hopeful that they could find buyers. With steady demand growth, and supply set to level off, the market could well tighten in the early to mid-2020s.Given that it takes about four years to bring a new export plant into service, customers will have to start signing contracts in 2018-19 if they want to secure LNG for when supplies become scarcer. Greg Vesey, chief executive of LNG Limited, an Australian company that aims to develop the Magnolia plant in Louisiana, said buyers understand that they need to support new export projects. “We are optimistic that in the next 12 to 15 months people should realise it’s time to make a decision,” he said. Meg Gentle, chief executive of Tellurian, which is developing Driftwood LNG near Magnolia, is also expecting movement soon. “2018 is going to be a very interesting year,” she said. One potential pitfall, though, is a continuing mismatch of expectations between buyers and sellers.

In cost terms, the US can be competitive with any other region for LNG. Its problem is that its business model has been based on 20-year contracts with buyers in Asia and Europe, with guaranteed revenues, enabling the developers to finance their projects. In 2012-14, when US LNG was a new idea and imports to Japan were selling at above $18 per million British thermal units, buyers were prepared to make such generous commitments so that projects could get off the ground. Today, they are much less accommodating, in part because of the way the global LNG market has changed. When the industry began, all sales were point-to-point between specific sellers and buyers. But as the market has grown, it has become more liquid, and sales have become more flexible. In 2000, only 5 per cent of the world’s LNG was sold on a spot basis or on short-term contracts. By last year, that was up to 28 per cent, according to the International Gas Union and IHS Markit. “When a utility needs gas, it can just go to the LNG store and buy some,” Ms Gentle said. Today’s markets are “idyllic for most large LNG buyers”, said Christopher Goncalves, chair of the energy consulting practice at Berkeley Research Group. “With such attractive prices available in the short- and midterm markets right now, they have not had much incentive to return to the long-term contract markets.” In 2016, there were 13 LNG sales contracts agreed for 15 or more years or on a “long-term” basis, according to Bernstein, the investment company. This year so far there have been just five. There has been just one with a 20-year term, for Venture Global’s proposed plant in Louisiana, with Edison of Italy, for 1m tonnes per year. Yuji Kakimi, the head of Japan’s Jera, the world’s biggest buyer of LNG, told the Financial Times last month that LNG providers needed to offer “reasonable” prices and flexibility, or “the golden age [of gas] will never come”.The result is that the standard model for financing US LNG projects has to change, according to Frank Harris of Wood Mackenzie. In the first wave of US projects, the LNG buyer took most of the risk, he said. “To get the second wave of US LNG plants away, the risk is going to have to be shared more equally.” Recommended Big Oil bets on a dash for gas Asia market for liquefied natural gas derivatives catches alight Energy shifts to a buyers’ market. Some developers accept this. “The first wave was riddled with risks,” said Octavio Simoes, president of LNG for California-based Sempra Energy, which has the Cameron LNG project under construction. “There was a lot of unknowns that led to a certain risk allocation in the structure of those projects,” he said. “That, frankly, is not going to be the same in the second wave.” The jury is still out, though, on whether compromises can be found between the demands of buyers and exporters. Faced with that problem, Tellurian has decided to try something different. The company is offering 60-75 per cent of the equity in Driftwood for sale to companies that would be both investors and buyers for the LNG. Rivals are sceptical. Mr Simoes of Sempra said whatever the financial structure might be, the underlying economics would be the same.But in a crowded market, sellers are under pressure to do whatever they can to stand out. Most of the 20-odd proposed US export projects probably will not make it, the ones that do will need some special advantage. “We are happy for others to follow,” Ms Gentle said. “But we are always trying to be faster.”

China, India and South Korea: the big three for LNG

LNG Limited, which hopes to export gas from Louisiana, had a team in the air on its way to China in May, when presidents Donald Trump and Xi Jinping announced a trade agreement. The section on gas had no real substance to it, but it sent a signal that both governments hoped US LNG sales to China would flourish. “We got a lot of extra meetings,” said Greg Vesey, LNG Limited’s chief executive. “I feel really good about that market. ”The announcement was a reminder of the critical role of governments in shaping demand for gas. More than half of the increase in global demand is expected to come from three countries — China, India and South Korea — according to the Berkeley Research Group. In all three of these markets, policies to shift away from coal and towards gas for power generation will be critical. Marco Alverà, chief executive of Snam, an Italian pipeline company that has just published a study on the gas market, calls China the “elephant in the room” of demand growth. He argued that the drive to cut local pollution, such as the particulates that cause smog, would be a critical factor supporting future demand for gas. Left to the market alone, LNG would struggle to compete with coal as a fuel for power generation around the world, said Octavio Simoes of Sempra Energy. The experience of some European companies, including Germany and the Netherlands, has shown that it is possible for a combination of coal and renewable energy to drive out gas.To thrive, LNG will need policies on pricing or restrictions on CO2 emissions, which are much lower for gas than for coal power plants. “If we are serious about reducing carbon emissions, then clearly we need to have more gas,” Mr Simoes said.